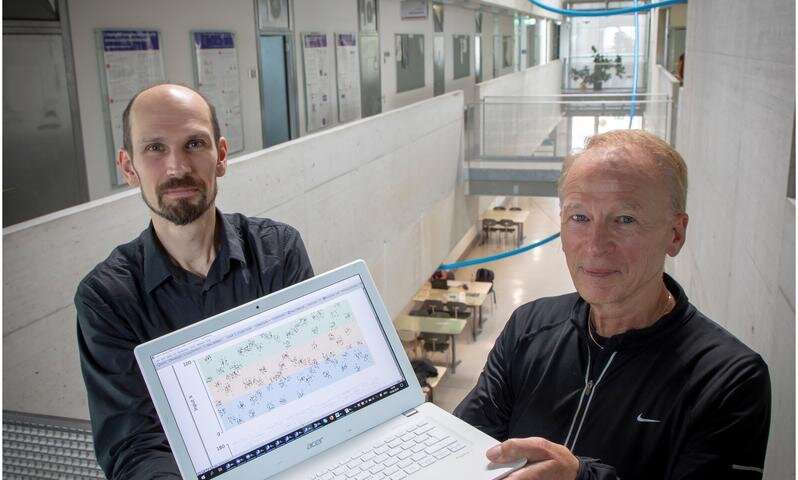 Computer scientists Robert Legenstein(left) and Wolfgang Maass(right) are working on new AI systems inspired by the functioning of the human brain and are more energy-efficient. Picture Credit: Lunghammer—TU Graz
One of the biggest obstacles to the widespread use of Artificial Intelligence (AI), particularly in mobile applications, is the high energy consumption of learning activities by artificial neural networks. The efficient transmission of information between neurons in the brain is one of the reasons our brain does it better. Neurons transmit brief electrical impulses (spikes) to other neurons — but only as much as is absolutely required, to conserve energy.

This principle has been adopted in the development of the new machine learning algorithm e-prop (short for e-propagation) by a working group led by two computer scientists Wolfgang Maass and Robert Legenstein of TU Graz. In the algorithm, the spikes only become active when required for the transmission of information in the network. To these less active networks, learning is a particular challenge, because it takes longer observations to decide which neuron connections boost network performance.

E-prop addresses this issue through a decentralized system adapted from the brain, in which each neuron records when its connections are used in a so-called e-trace (eligibility trace). The approach is approximately as effective as other known methods of learning which are the best and most comprehensive. Details have now been published in Nature Communications.

For many of the machine learning techniques currently in use, all network operations are processed centrally and offline to track every few steps on how the links were used during the calculations. This, however, requires a constant data transfer between the memory and the processors—one of the main reasons for current AI implementations' excessive energy consumption. On the other hand, e-prop works entirely online and does not even require separate memory in real operation — thus making learning much more energy-efficient.